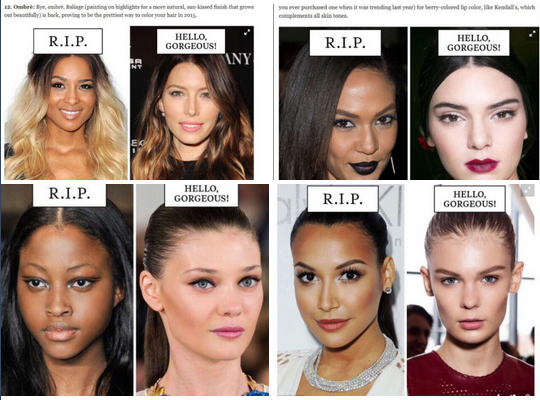 Let’s start with the big questions. Do I think Cosmopolitan magazine’s online “21 Beauty Trends That Need To Die in 2015” article is racist? No. Do I think it’s racially insensitive and offensive to black women and women of color? Yes, I do.

This article was published in January of this year and it wasn’t until a few days ago that people even realized this article existed. The fact that it took almost three months for anyone to find out about this article shows how many people actually READ Cosmo. I’ve personally never owned a copy of that magazine and probably never will if this is where it’s heading.

I don’t think the article is racist, because I don’t think it was intentional on the editor’s and writer’s part. I’m sure they were just like, this is a good “no” and this is a good “yes”. That being said, I do think it’s sad that no one thought that putting all the women of color on the “RIP” list wasn’t a good idea. It goes to show that there needs to be more women of color working for these magazines, websites, and publishing companies so mistakes like this will happen less in the future.

And, yes I realize they had Nicole Richie on the “Hello Gorgeous” side, but Nicole’s mixed race heritage points more towards white physically. It’s basically reinforcing the idea that if you’re not white or of lighter skin then you’re not considered beautiful.

Cosmopolitan can apologize or not, it doesn’t really matter to me personally. I’m thinking, “Do we really need another fake apology?” Just a few “I’m sorry’s.” and “We never meant to hurt anyone’s.”,  before some other publication, person, or company does something similar a month later. I want these companies to learn something from all these instances and grow to be more racially sensitive. It would be nice if I can go a week without something else popping up on my twitter feed. But, that’s just wishful thinking.

View all posts by dxlynn

I’m going to revamp my entire winter wardrobe soon. First stop, @crossroads_midwest and @buffaloexchange this weekend. 🔥
I learned so much writing this article for #humantraffickingawareness month on @behindthechair_com. Go check it out! #getinformed
I miss the sun. How long is it until spring again? #tbt
I’m ready for my closeup. 📸
The best thing about having pink hair is that it brightens up even the most neutral outfit. 💕
When @fabjaye33 was tired of me struggling to take the perfect photo and did it herself. #friendshipgoals #angles
%d bloggers like this: